Corruption scandals and waves of violence lead many people to believe that prison is the best remedy to the common problems impacting several Latin American countries. However, the workshops that the Humanitas360 Institute has been organizing with professionals and experts in public security show otherwise: as more people get arrested, violence increases and institutions get more corrupt.

This happens because every new inmate becomes a compulsory member of criminal factions. Inmates and their families start being obliged to contribute financially to those organizations. Moreover, the more qualified and well-educated inmates are, the better it is for factions that are then able to penetrate other spheres of public life. How do we turn this around?

The meetings of this journey bring together judges, ex-inmates, political leaders, staff members of prisons, journalists, researchers and representatives of organizations specialized in this field. The main objective of the working groups is not to discuss human rights, but rather combat the increase of corruption and violence.

In order to accomplish this goal, in spite of ideological and theoretical differences, the participants agree that it is necessary to change the society’s view on sentencing, imprisonment, and social reintegration of ex-inmates. By employing design thinking tools and group activities, the workshops seek to build collaboratively a unified action strategy that will shift people’s paradigm about sentencing, incarceration and recovery of former inmates.

An important part of this process is that the unified strategy also needs to include projects and research that have been developed by the workshop participants themselves. In addition, this means that all of the members of the group need to overcome political, ideological and theoretical differences for the sake of the greater goal, which is to revert the increase of violence and corruption.

Even if the meetings started taking place in Brazil, this journey seeks to create a structure that will involve other countries in Latin America. At the first workshop, for example, the organization “Espartanos” from Argentina was a participant and continues to be engaged. 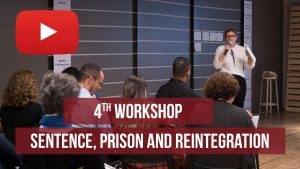